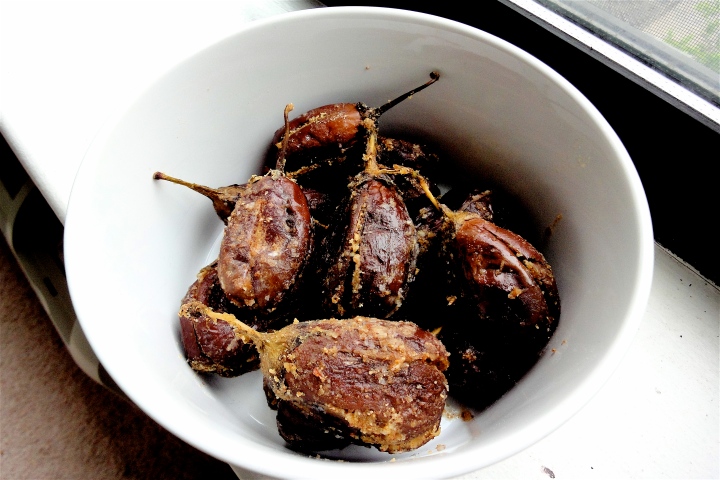 At 8am on certain days each week, my door opens to reveal a small, dark lady with a dimpled smile.  I’m usually waiting for her anxiously, and I breathe easier when I hear the doorbell ring.  My morning has started much earlier and fairly reluctantly, with two bright-eyed and widely awake kids.  Kirti behn is our new part-time babysitter who comes in from Jersey City.

I’ve recently discovered that she loves to cook much more than she likes to babysit.  Kirti introduces me to food from her native state of Gujarat which is in the far west corner of India.  She uses lots of ajwain (oregano), besan (chickpea flour), black mustard seeds and curry leaves in her cooking.  There are several interesting dishes that she makes, including a yellow yogurt curry thickened with chickpea flour called kadhi, a mixed vegetable dish called undhia and bread stuffed with fenugreek leaves, called thepla.

We find time to tuck in bits of cooking while pursuing my energetic toddler and taking care of the new baby.  The cooking adds a note of sanity to my day and of course, to my tummy.

I love watching Kirti behn cook.  Like all Indian home-cooks, she has her own way of doing things that is a result of many influences.  Such as mothers, aunts, sisters, grandmothers.

Today I get a cooking lesson in making easy baby eggplants stuffed with peanuts and besan.  The eggplant turns out crisp and juicy, and the filling tastes smooth from the besan and crunchy from the peanuts.  This dish can be served with any Indian bread, especially rotis, theplas or parathas, along with a side of yogurt.

12 baby eggplant, cut lengthwise and crosswise 3/4 down, with the stem on
Enough oil to cover the bottom of your frying pan, about 2-3 tbsp or more

1. Prepare filling, and stuff into the baby eggplant.

2. Heat oil in a nonstick pan.  Fry the eggplant in a single layer on low heat.  Keep covered while frying and and occasionally uncover to gently turn the eggplant so that it cooks evenly.  Cook until eggplant is cooked through (gently poke knife to test) and  the stuffing changes color to a warm reddish brown.