“You haven’t cooked even once the entire time I’ve been here,” my mother sniffed, as her ten-day visit came to a close.  “I think you like to eat more than you like to cook.”

I protested “But mom, if you cook I get to taste your cooking.  Then I know what to make, how to make it, and the flavors that I should be seeking in my cooking.”

Now, four year old Agastya has always loved his nani’s cooking.  Even when he was just weeks old, if nani began to fry onions in the kitchen, he’d wake up very hungry and demand to be fed.  As he grew older, he’d sit at the table and lap up her cooking, with an expression of intense satisfaction on his face.  This time, a day or two after she left, Agastya began to ask for nani’s aloo parathas, a traditional Indian potato flatbread that’s toasted on the stove.  My husband, full of praise for my mother’s impeccably seasoned food and crisp hot-off-the-stove parathas, sent me some doubtful, “what can we feed him instead,” looks.

Rolling out fresh Indian bread has been my weakness: I’ve been battling to make good rotis and parathas for what seems like a long time now.  I have been subject to countless self-inflicted stringy, rock-hard and inedible experiments on this topic.

By now, all of this uncertainty and doubt, the weight of all the failed attempts was beginning to get to me.   On this trip I had keenly observed my mother making aloo parathas using a technique that seemed almost gnocchi like in style.   I jumped into replicating her steps, and to my utter surprise, turned out a very tasty easy-to-make potato paratha.

If you are brand new to Indian bread making, this is a good place to begin.  Here is the recipe.

Mash up the hot boiled potatoes with a good sprinkle of rock salt, a generous squeeze of lemon, the onions and coriander.  Do a taste test.

Then liberally dust whole wheat atta flour into the potatoes kneading until the dough comes together into a ball.

Place the disc on a hot cast iron skillet, and toast each side until brown dots appear.  At this point spread a quarter teaspoon or so of oil on each side and cook for a few more seconds flipping once.  Remove from flame and enjoy hot with a side of plain yogurt or raita. 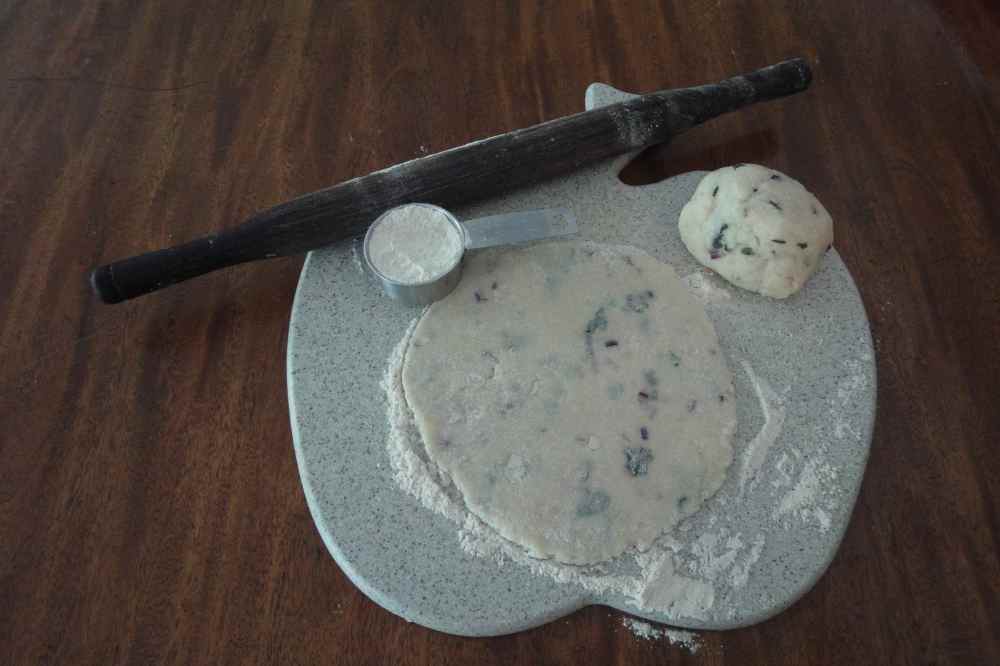