Before I return home to India, my mother calls and asks me each time”What would you like to eat?  What should I make for you?”  I always find the question amusing and quaint and sweet, and put it down to one of my mother’s quirks.  But recently, I am becoming the same way.  When I’m feeling uncertain, I start with food.  I find that I can’t go wrong with a home-cooked meal for someone that I want to fuss over.  The food says things that I can’t put into words.  It makes things easy and affectionate.

This time when I was home, my mother looked at me on one of those early mornings, and said “what would you like for breakfast?’.  Now breakfast is usually a fruit-cheese-toast type of affair in our home, and so I when I tentatively said “nothing?” and received an odd look from my mother, I knew that she was talking about the real stuff.  Poha, upma, idli… and in my fantasy version of the breakfast menu…samosas.

Now my mother doesn’t care all that much for this delicious deep fried, potato-pea stuffed pastry best eaten hot with a cup of tea, or not anymore at least, and certainly not for breakfast.  Her love affair with samosas are a thing of the past.  Once upon a time, claims my mother, she would make her own samosas from scratch for an after-school snack.  My masi lends credence to this story, and adds that my mother never shared the precious samosas with her two younger sisters.

I’ve always loved hearing the story of those samosas, about how my  mother boiled the potatoes while kneading the dough and then heated the oil for frying while she rolled and stuffed the pastry with the spiced filling.  “It took no time at all,” says my mother, “what’s in a samosa?” 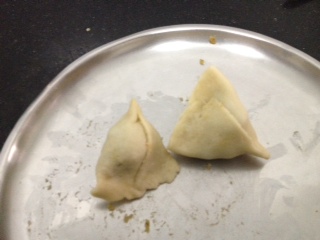 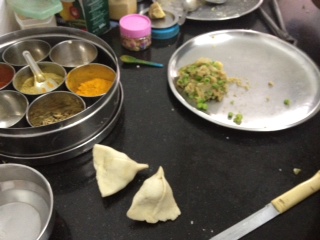 Filling: Heat the oil, and add the cumin seeds such that they sputter in the hot oil.  Add the ginger and sauté for half a minute.  Throw in the diced boiled potatoes and the peas, and add the rest of the dry spices after a minute or two.  Stir fry for several minutes until the mixture appears cooked and the spices adhere to the potatoes.  The mixture can be coarsely mashed while stirring.  Taste and adjust seasonings if needed.

Dough:  Pour the flour onto a flat surface and make a well in the center.  Add the salt and ghee in the well.  Slowly, rub the  ghee into the flour until the mixture resembles breadcrumbs.  The flour should loosely bind together when you gather it into your fist; add more ghee if it doesn’t bind.  Make a pliable dough with enough water.  Cover and keep aside for 15 minutes.

Divide into 3 balls and roll out little circles, about 6 inches each.  Cut the circles in half and run water with your fingertip around the edges.  Now turn the semicircles into cones, seal the middle by joining the two ends and stuff them with the filling.  Stick the edges together.  This is a simple-to-master but important technique.  Here is a video of my grandmother stuffing the samosas.

Finishing stuffing all the samosas and keep aside.

Finishing: Heat oil for deep frying.  The oil should be hot, but not too hot as the samosas will deep fry for a little while.  Slip in the samosas and let them fry for several minutes, flipping so that each side turns golden brown.  Serve hot with ketchup.

8 thoughts on “How to: Samosas”