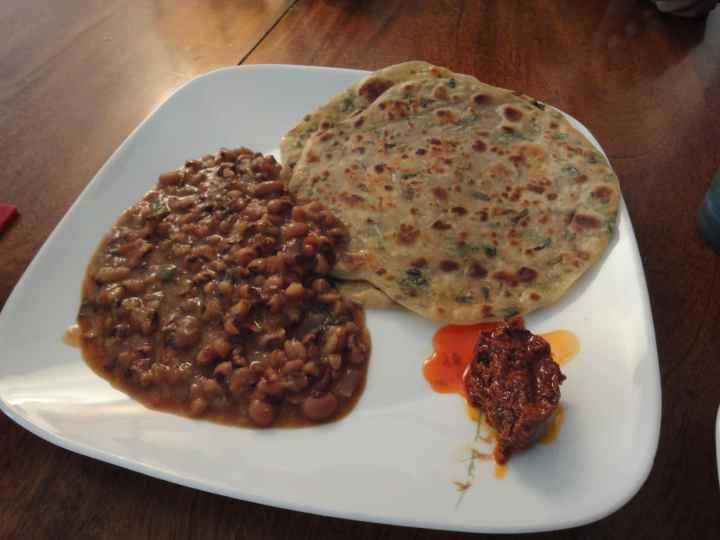 Sunday mornings are when I leisurely cook a pot of beans.  I have made rajma for several weekends now, simmering the beans for almost three hours each time.  The boys enjoy sitting down to a hearty meal of rice and beans after their morning soccer class, and I feel sated just watching them eat.  Beans are soul warming and belly filling, and you almost can’t mess them up with long, slow cooking.

This weekend I made Sanjeev Kapoor’s black-eyed peas, his lobia rassedar, from his book of Accompaniments.   Although I already have a good recipe for black-eyed peas that I’ve written about before, his recipe read a little differently from mine.  It called for yellow fenugreek seeds, cumin seeds and dried red chillies sputtered in hot oil (the tadka) and ground up with fresh ginger and garlic.  No garam masala except for a stick of cinnamon thrown into the browning onions at the beginning.  Chopped tomatoes tossed in a little later.  I was intrigued, and excited to pound the hand-ground paste in my granite Thai mortar and pestle that had been acquired in lieu of the Indian sil batta that I so desired.

I was not disappointed.  The tadka spices and ginger-garlic sent up a earthy, heady aroma as I crushed them into a thick brown paste.   My browned onions and tomatoes cooked down into a rich curry.  The stew sent off rich, appetizing smells as it slowly cooked on the stove.  The black-eyed pea was unusual and delicious, and especially tasty with delicate, fresh green methi parathas.

A handful of cilantro leaves, chopped